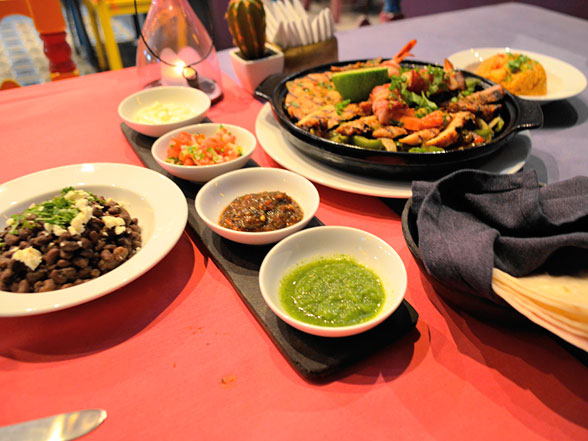 Khói Thơm is reputed to be the source of the best Mexican food in Saigon, many had said without hesitation. On entering Khói Thơm, I was impressed with the décor & the frontage. It is bright, cheerful, with a strong Mexican influence & a quaint, inviting approach.

Once at our table, we were given nachos with salsa. A nice touch & made perusing the menu a less pressured task, even with the waiter loitering within feet of us! We chose queso fundido (75,000đ) followed by mary tierra fajitas platter (250,000đ). A pineapple juice & a passion fruit, honey & coconut smoothie (35,000đ & 45,000đ) were our chosen drinks.

The drinks arrived & I was struck by the fact that the pineapple juice was tasteless, an amazing feat to make a drink with absolutely no taste! The juice was clearly not fresh as described. The passion fruit smoothie on the other hand was refreshing with a fantastic tang. Shortly after the starter came, a bowl of melted cheese topped with cilantro and herbs. This lacked a depth of cheesy flavour & was nothing special in the slightest, not something I will order again. The platter of sizzling steak, chicken & prawns was served with dips, refried beans & tortillas. This was good, possibly over spiced & the dips lacked flavour & quantity. The chicken & steak were incredible, the 2 prawns were tasty but lacking in quantity.

This may be the best in Saigon but it is leaps & bounds behind Mexican I have sampled elsewhere. The service is void of customer focus, a higher priced establishment should have higher quality service in my view. I advise people to be aware of the 5% service charge & to leave high expectations at home before venturing here.