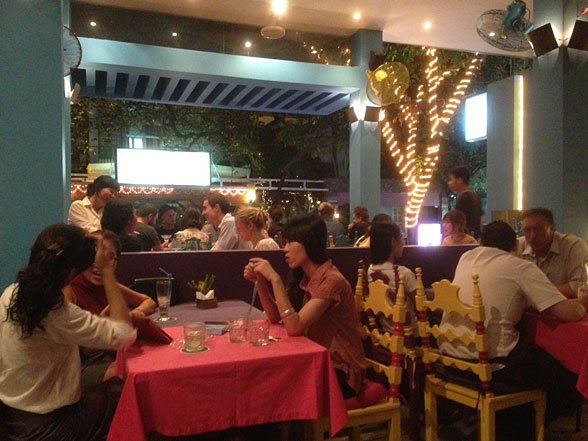 No smoke without fire

Khói Thơm translates as fragrant smoke, a name which hints at this hidden jewel’s previous incarnation as a Viet-Mex fusion restaurant. Now, though, its metamorphosis into a fully-fledged Mexican eatery is complete - complete with an imported Mexican chef - and Khói Thơm enjoys a reputation as the best Mexican in town. Latin rhythms play incessantly beneath the hubbub of conversation, while the décor is garishly colourful - a vibrant combination of pinks, purples and turquoises. The menu offers an array of old favourites: burritos, fajitas, quesadillas, tacos and nachos, alongside less well-known dishes such as Veracruz- style seabass and Carnitas-style pork belly. For those in need of stronger refreshment, there is an extensive and original cocktail list, as well as tequila slammers for 18,000đ to get the night off to a raucous start.

We ordered cheese nachos, followed by chicken enchiladas and the aforementioned pork belly, and we were not disappointed. The nachos were well made; crispy and cheesy, though there was a little too much guacamole. They whet our appetite for the main course, which was on its way shortly. The enchiladas, though small, were mouth-watering and packed a pleasing chipotle punch. The pork belly was accompanied by rice, beans and flour tortillas, and which combined well the succulent meat. Our meal was topped off with a couple of margaritas from the wide variety available on the menu - one could spend an interesting evening working through the list!

At upwards of 300,000đ per person, Khoi Thom is not the cheapest option. However, its authenticity, pleasant setting and overall experience mean its reputation of excellence is well deserved - there’s no smoke without fire.

By Ben Longworth from

Working in HCMC since 2011 as an Academic Manager. Favorite spots include Quán Bụi, Phở Hùng and Ganesh.