Mimosa is a restaurant located in the heard of the backpacker area in Ho Chi Minh City's first district. As is the standard in the area, the menu is varied with dishes from Vietnam, Mexico and other Western countries. Prices are affordable for Western food. 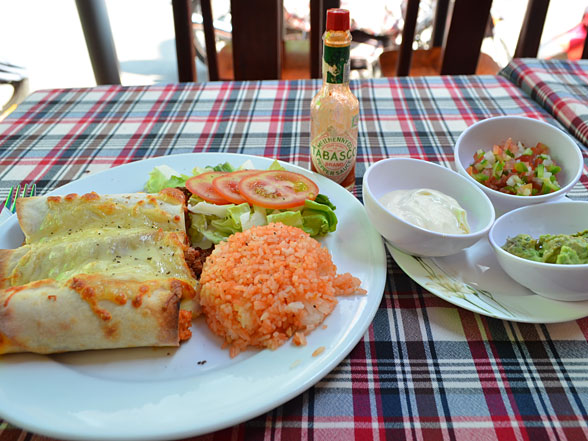 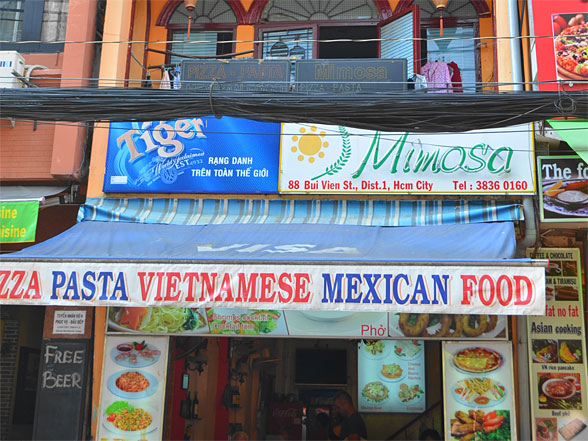 Today’s lunch was at Mimosa which is located near Universal on the main Bui Vien drag. I chose to sit outside but soon regretted it due to the constant hawkers selling everything from shoe shines to sunglasses to books.

I ordered the Enchiladas, selecting a combination of the 3 fillings; beef; chilli and chicken. They were served after about 15 minutes, nicely presented with guacamole, sour cream, salsa & Mexican rice. The temperature of the enchiladas was just right & they were very tasty. The chilli filling stood out as being the tastiest though. The guacamole & sour cream were rather disappointing, both lacked flavour & correct seasoning. The rice was acceptable, however there were large chunks that had stuck together to create solid ‘rice balls’. The price of 85,000đ is fair enough as the enchiladas were very satisfying.

Service wise, there is certainly room for improvement. The solo waitress was polite enough but clearly she is not enthused by her role. The standing over a customer whilst they peruse the menu is something I am not keen on and it has been adopted here. Also, the cutlery was wrapped in toilet paper, I mean actual toilet paper. That’s not a huge problem but certainly quirky to say the least.
Mimosa gets 3 stars for today’s effort & I will return to try other options.