Món Huế is a restaurant chain which serves various famous dishes from Huế and the rest of central Vietnam. Everything from Bánh Bèo to main dishes like Bún Bò Huế. They also offer Vietnamese sweet soups for dessert. 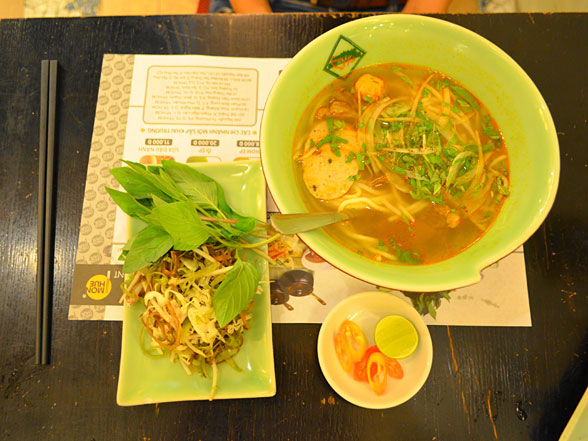 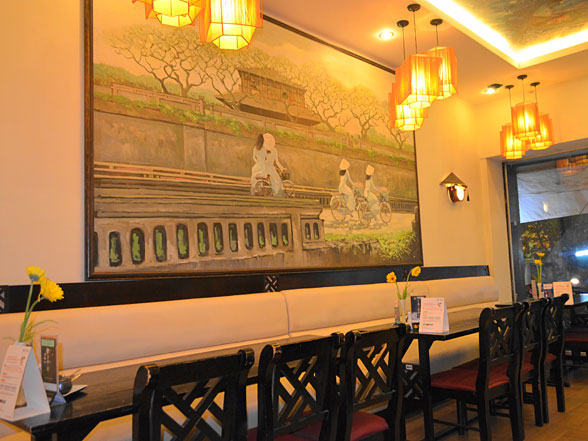 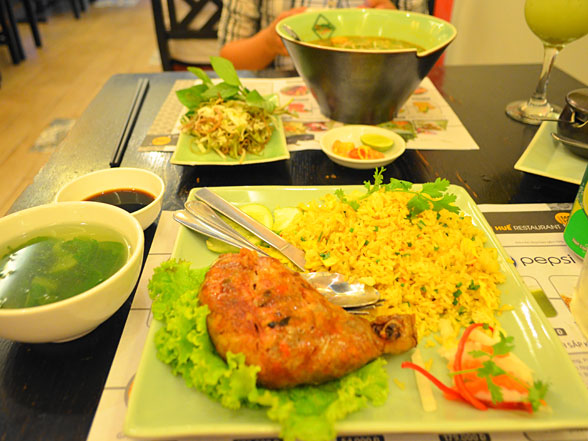 My friend, from Huế, had been missing the taste of Huế so Món Huế seemed like the obvious choice to quell her savoury cravings. On entering, I was struck with the décor which is tasteful with images of Huế adorning the walls. The lighting was just right & pleasant music played in the background. The silence inside is in huge contrast to the noisy, unceasing traffic outside.

The menu is vast & after substantial debate, I chose fried chicken with rice (84,000đ) & my friend chose her lifetime favourite of beef shank soup (57,000đ) with a guava juice (20,000đ). Our meals were brought after 25 minutes, I was quite happy with that as it suggested real effort was being put into the preparation.

I was wrong & although the presentation was good, the food itself was not. The ‘soup’ that accompanied my chicken was tasteless with a consistency like an oil slick. A single spoon full was enough of that. The chicken was a tragedy. It was chicken skin wrapped around a concoction of chopped chicken& vegetables. The skin itself was good but the filling was exceedingly bland, I ate the skin but a few bites of the mess inside sufficed. The rice however, was very tasty & cooked perfectly. My friend’s soup was similar, she found the broth was lacking in taste with an absence of spice. The noodles tasted like a cheap version of authentic Hue noodles. Her guava juice was fantastic though.

So if you fancy rice & guava juice, this is the place. I cannot say all dishes are so poor but beef soup is a Hue sustenance, a signature dish that should be done properly. I shall never return & give it 2 stars for the décor & attentive staff.